DIRECTLY FROM THE WAPO:

Broward County Sheriff Scott Israel defended his leadership following the revelation that one of his deputies failed to engage a shooter in a high school. (Patrick Martin/The Washington Post)

Republican state lawmakers in Florida called on Sunday for the suspension of Broward County Sheriff Scott Israel, accusing him of “incompetence and neglect of duty” in the months before the Feb. 14 mass shooting at Marjory Stoneman Douglas High School.

Florida House Speaker Richard Corcoran and 73 Republican colleagues urged Gov. Rick Scott (R) to suspend Israel, a Democrat who was reelected in 2016 and has said he would not resign over his agency’s handling of one of the country’s deadliest school shootings.

“Sheriff Israel failed to maintain a culture of alertness, vigilance and thoroughness amongst his deputies,” Corcoran wrote in a letter released Sunday. “As a result of Sheriff Israel’s failures, students and teachers died.”

Israel said before the letter’s release that the agency had stumbled in its handling of red flags about the accused shooter, including multiple warnings that he could carry out such an attack, but that he should not be held personally responsible.

“I can only take responsibility for what I knew about,” Israel said Sunday morning in an interview on CNN’s “State of the Union.” “I’ve given amazing leadership to this agency.”

The sheriff has faced intensifying questions about his office’s response to the massacre after the revelation that an armed deputy on the scene did not enter the school while the shooter was inside. That deputy, Scot Peterson, retired last week after being suspended.

Israel said Sunday that he should not be faulted for Peterson’s actions. “You don’t measure a person’s leadership by a deputy not going in,” he said.

State Rep. Bill Hager (R-Boca Raton) sent a letter to Gov. Scott on Saturday accusing Israel of “neglect and incompetence” and calling for his removal. Israel said Sunday, “Of course I won’t resign,” adding that Hager’s letter was “shameful” and “politically motivated.”

The Florida Department of Law Enforcement said Sunday afternoon that it would launch an investigation, at Gov. Scott’s request, into the shooting’s law-enforcement response. Similar reviews have been put together after previous mass shootings, and they frequently identify ways law-enforcement agencies could have improved their actions before and during such attacks.

Sheriff Israel said in a statement Sunday that his agency welcomed the investigation and believed “in full transparency and accountability,” adding, “This independent, outside review will ensure public confidence in the findings.” David Hogg, a senior at the school, called Israel “a good man” during an interview on “This Week” and said “he cares about the people.” But Hogg said there were breakdowns in procedures. “Were there mistakes made? Absolutely.”

Local and federal authorities received numerous calls about the accused shooter, 19-year-old Nikolas Cruz, before the attack, including at least four suggesting that he could carry out a school shooting and a 911 call saying he had pointed a gun at someone.

Israel said Sunday that most of those tips were handled appropriately but that, in two of the calls, “we’re not sure if deputies did everything they could have or should have.”

When CNN host Jake Tapper asked Israel if he thought the shooting might not have happened if the agency had done things differently, Israel said, “If ifs and buts were candy and nuts, O.J. Simpson would still be in the record books.” He added, “We understand everything wasn’t done perfectly.” 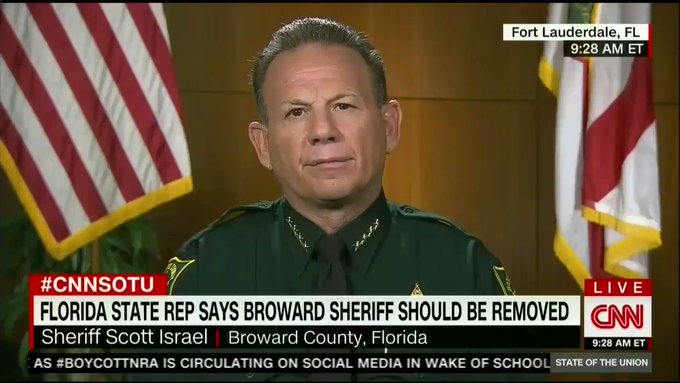 .@JakeTapper asks Broward sheriff if he thinks the Parkland shooting might not have happened if his office had done things differently.

Sheriff responds: “If ifs and butts were candy and nuts OJ Simpson would still be in the record books.”

Israel also noted that he believed Peterson’s inactions could have cost lives. “Do I believe if Scot Peterson went into that building, there was a chance he could have neutralized the killer and saved lives? Yes, I believe that,” he said.

Israel said an internal investigation into the office’s handling of the shooting is ongoing. “We will investigate every action of our deputies, of their supervisors,” he said, “and if they did things wrong, I’ll take care of business in a disciplinary matter, just like I did with Peterson.”

During a six-minute rampage inside the Parkland high school, police say, Cruz fatally shot 17 students and faculty members before blending in with the fleeing teenagers and escaping the campus. He was taken into custody later that afternoon and could face the death penalty if convicted.

Police from the neighboring city of Coral Springs have said three other Broward deputies besides Peterson were waiting behind cars outside the school when they responded to the shooting. Israel said Sunday that only Peterson, then the school resource officer, was at the school during the shooting.

A spokeswoman for Israel’s office, in a statement released late Saturday, insisted there was “no confirmation, at this time, other deputies did not enter the school when they should have.” She said this claim continues to be investigated.

The Coral Springs police said in a statement that they were “aware of media reports” but were not going to comment because of the ongoing investigation.

The Washington Post has been unable to reach Peterson, who has not spoken publicly.

Andrew Pollack, the father of Meadow Pollack, one of the students who died in the Parkland shooting, addressed Peterson during a Sunday morning appearance on the Fox broadcast network.

“There is one deputy that worked there. Peterson. He worked there, and he’s a coward,” Pollack said. “He stood by the door. I know for a fact that he could have made it to the third floor and saved all six victims, if he wasn’t some little .… Words can’t even describe the way that I think about him. But I am not trying to think about that stuff because that’s just negative and it’s just going to make me toxic.”

Some survivors of the attack have said that they understand Peterson’s reluctance to go inside, given that he may have been afraid, while others have expressed frustration at the warning signs missed over the years.

But they also said that most students are focusing their anger on pushing for new gun-control laws rather than blaming anyone for failures leading up to or during the shooting.

“I’m not angry; I understand that things happen,” said Carly Novell, a 17-year-old senior who survived the massacre. “But, really, the only way that it could have been prevented is gun control. It all leads back to the gun. He couldn’t have killed all these people if he didn’t have a gun.”

Since the Columbine massacre in 1999, it has become widely accepted police protocol to respond to active shooters by rushing to the scene and stopping the threat. The Broward County Sheriff’s Office has not responded to a request to release its active-shooter policies, but Israel had said the deputy should have rushed inside.

Israel’s office released a letter late Saturday that he wrote to Scott in response to Hager’s call for the sheriff’s removal from office.

Israel, who was reelected in 2016, stressed in the letter that Peterson was the only law enforcement officer on the campus during the shooting. He also wrote that Coral Springs police received the initial 911 call and went inside the school first without realizing that the shooter had left four minutes earlier, suggesting that these officers believed they were pursuing an armed attacker or attackers.

In his letter, Israel wrote that these Coral Springs officers were followed by others from that department and Broward sheriff’s deputies. However, his letter does not say when any of the responding officers learned that the gunfire had ended and the shooter had fled, nor does it say whether his deputies waited outside the school first before going in.

Israel’s office has declined to make him available for an interview with The Washington Post. His interview Sunday on CNN was his second appearance on the cable network in less than a week. On Wednesday, he participated in a televised town hall that the network hosted in South Florida that included survivors of the attack, their relatives and Loesch, the NRA spokeswoman.

Tapper, who also had hosted the town hall, asked Israel in the interview Sunday whether he had known during his town hall appearance that Peterson had failed to go inside. At the town hall, the sheriff had been sharply critical of the NRA spokeswoman.

Israel said that they were still investigating reports about Peterson at the time and that it was not the appropriate time to tell the families about the deputy’s actions. “I couldn’t disclose it then,” he said. “That’s not the way you do things, over a news camera. You do it individually. You meet privately with families. You have compassion. You don’t do it at a public forum. And we weren’t ready to do it anyway.”

[ Red flags. Warnings. Cries for help. How a system built to stop the Parkland school shooter repeatedly broke down ]

Officials have been sharply criticized for how they handled the slew of red flags littering Cruz’s life before the shooting. Cruz repeatedly came to the attention of law enforcement officials, social services investigators and school authorities, but none of that prevented him from passing a background check and buying the AR-15 that police said he used to carry out the shooting.

The FBI admitted that it never investigated a January tip saying that Cruz could shoot up a school. The Broward sheriff’s office also said it received at least two similar warnings, but there is no evidence that either of these led to any investigation.

The Broward sheriff’s office said it has launched internal reviews of how it handled the two prior warnings, which were among 23 calls the agency said it received relating to Cruz or his family.

In a February 2016 call, a tipster warned that Cruz “planned to shoot up the school.” The information was relayed to Peterson, the sheriff’s office said, but it remains unclear what happened after.

In November 2017, a tip came in to the Broward sheriff’s office from a caller warning that Cruz was collecting guns and knives and might be “a school shooter in the making.” Cruz’s mother had died that month, and he was briefly living with a family in Palm Beach County.

The sheriff’s office said the deputy who took the call never filed a report and, speaking after the massacre, told investigators he referred the caller to the sheriff’s office in Palm Beach. However, the Palm Beach County Sheriff’s Office told The Washington Post that it had no record of receiving that threat.

Michael Scherer, Kevin Sullivan and John Wagner contributed to this report, which has been corrected. It originally said that Andrew Pollack spoke to Fox News, rather than the Fox broadcasting network.

Mark Berman covers national news for The Washington Post. He also anchors Post Nation, a destination for breaking news and stories from around the country.